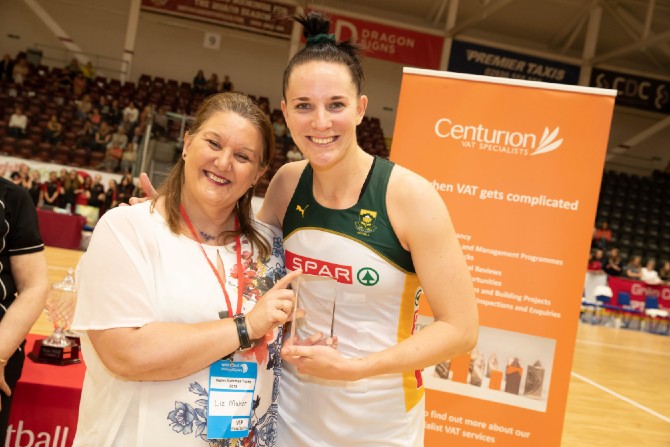 In a packed summer of women’s sport – the Women’s Football World Cup, International Cricket, Wimbledon and the Netball World Cup starting in Liverpool this week the fact that Welsh Netball were playing host to some of  the top International Netball teams from South Africa, Trinidad & Tobago and Malawi may have been missed by some but what a fabulous four nights of “Fast & Furious” Netball matches we were treated to at The Viola Arena in Cardiff last weekend.

The Welsh International team grew in confidence over the four nights and fought back from an initial loss against South Africa to end up winners over Malawi and then Trinidad & Tobago.

I’m no sports commentator but you can see BBC Sport commentary HERE and it was brilliant that S4C showed some of the matches live on the weekend – this really is a sport on the up across Wales with the support from Welsh Netball to engage across all generation and abilities to get involved.

Centurion VAT wanted to play their part and not only did we enjoy going to watch and take our friends in business along – one of whom travelled from Southampton such was the lure of the match – but we wanted to lend our support to an organization looking to grow the skills of young girls across Wales and through the success on the court of the Wales team help put Wales on the International map. We were delighted from the business perspective to see the level of TV publicity that was achieved as well. The courtside banners proclaiming “Centurion VAT – For when VAT gets Complicated” was certainly well on display reaching out with our message to tens of thousands of viewers.

We were delighted when Sarah Jones the CEO of Welsh Netball emailed the team here to say ‘Huge thanks to Centurion VAT for sponsoring the Welsh Netball Summer International Test series against South Africa. It is great to have businesses supporting women’s sport in Wales particularly with this Netball Summer series seeing unprecedented levels of broadcasting. Thank you for leading the way and we hope more businesses start to engage and see the value of supporting netball in Wales; and more importantly helping female sports role models inspire the next generation’.

So a “win - win” for everyone from the young girls in the audience inspired to follow their Netballing dreams, to the National Welsh Netball team growing their success on the court; for the future of the sport in Wales; through to your own Centurion VAT team raising awareness of the VAT skills and expertise we bring to businesses and finally for Wales creating another reason why it’s a great place to live, work, hold events, set up your business and of course - play Netball!

The Centurion VAT team are delighted to confirm our ongoing support for Wales Netball in this next 2022 season as o… https://t.co/c8fRwNdE0l